Hey. I'm Hakan. I created Dytto. I thought nothing of it initially, it was a simple "let's try some new tech" type of project with no real aim. It turned out decent so I decided to put it online.

A few hours after going live without a proper logo and a landing page, I saw a tweet from Adam Wathan who created a CSS framework called Tailwind CSS, which I've been using since its very early versions.

(In case the tweet is unavailable: He asks who makes cool stuff with Tailwind.)

I replied with mine even though I did not think it's cool enough to show off. I thought it might bring a few visitors to the landing page and did not expected much. 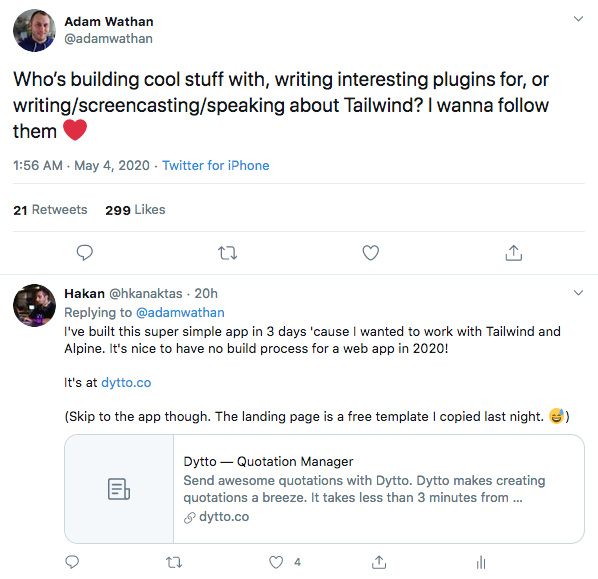 A few minutes passed by, I checked my analytics dashboard and saw like 20 visits from USA and Canada. Feels great! It was 2 AM where I live and I've been yawning for the past hour. So I get up and go to sleep, but decided to check Twitter feed one last time. Someone liked that tweet of mine. Feels good. I checked the tweet statistics and it says around ~50 clicks.

It gives me that adrenaline rush and I jump out of bed to check analytics dashboard again, and YEAH! More than 50 people have already visited in less than an hour and it already got 3 registers as a product that's not even in its beta stage. THREE REGISTERS! This is the first time anything I've built gets that much attention in such short time.

I've ended up collapsing at around 5 AM and woke up at 9 again. As of writing this post (at 11 PM) we've got just a little shy of 300 visits from 120 unique visitors from all around the world.

This was definitely an achievement for me and I'm excited too see what's next!